Today, you will need to pick an SDCARD (except if you have a brand new Nikon Z camera or an old Canon DSLR). 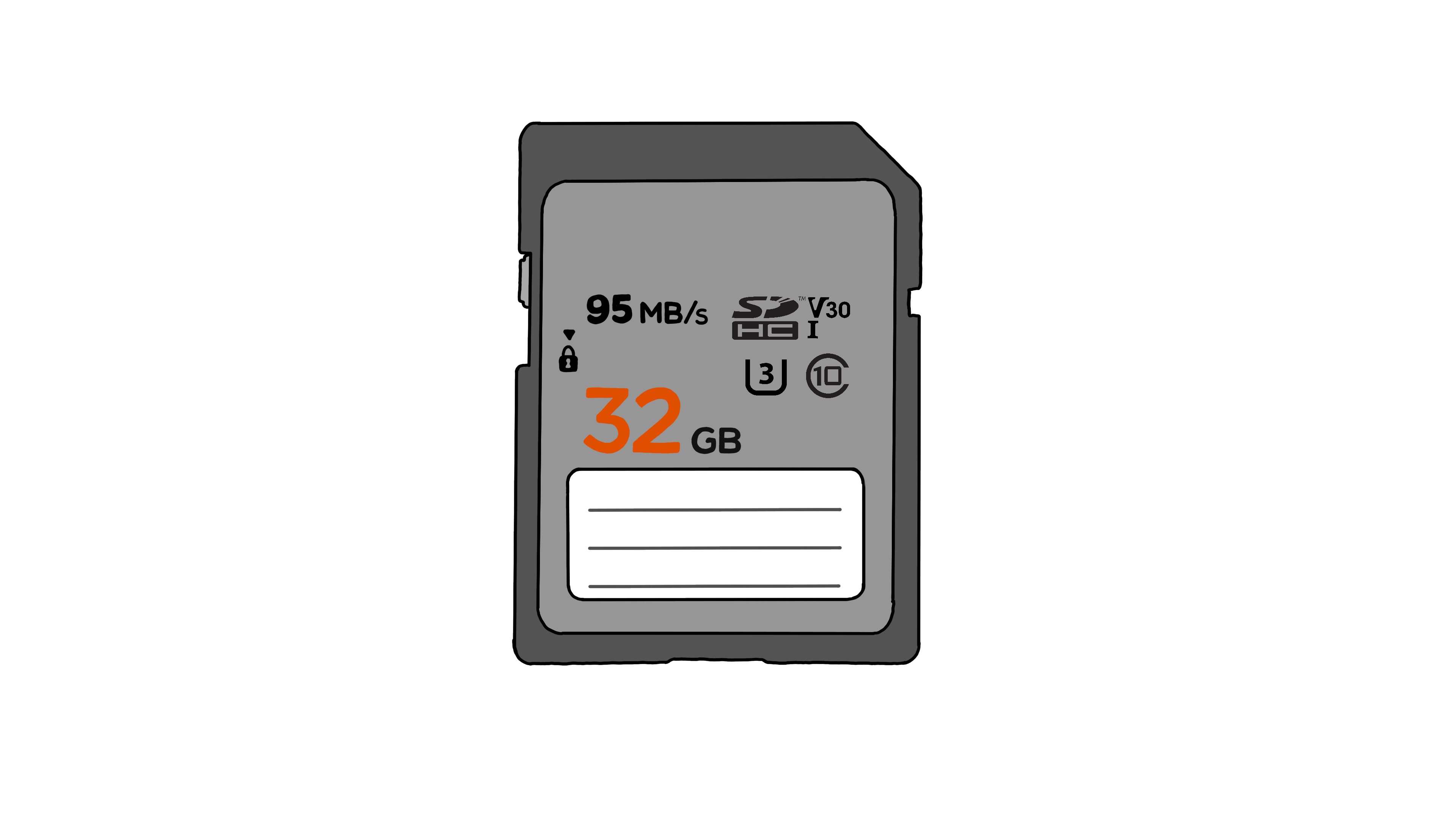 What are all those numbers and logos printed on the card itself?

Because it could have been simple to just choose the size you want, brands did make things a bit more tricky … and because the marketing is everything that drives them, they probably don’t care either if you understand the speeds, the numbers, the units ….

Well, you probably have been fooled at least once in your life by a glorious bitrate printed with a big and shiny font on the SDCard label.

But what information can you find on this sticker that looks more and more like a soapbox?

You should be able to read the writing speed, the reading speed, the bitrate class, the standard and obviously the capacity of the card.

First of all, a small reminder of the commonly used units in computers :

This is the trickiest part of the label :

– the Byte, which is also known as an Octet (depending on where you live), is written with a capital « B ».

You will write the “octets” with a small “o“, never with a capital “O” because it could be confused with a ZERO.

That said, when a Byte number is small, marketing guys prefer the bit version because it’s 8 times bigger.

Your camera 4K bitrate is shown in megabits per second, 100mb/s is only 12.5megabytes per second … not as sexy …

How is it related to SDCARDs?

The biggest number on the label is obviously the size. 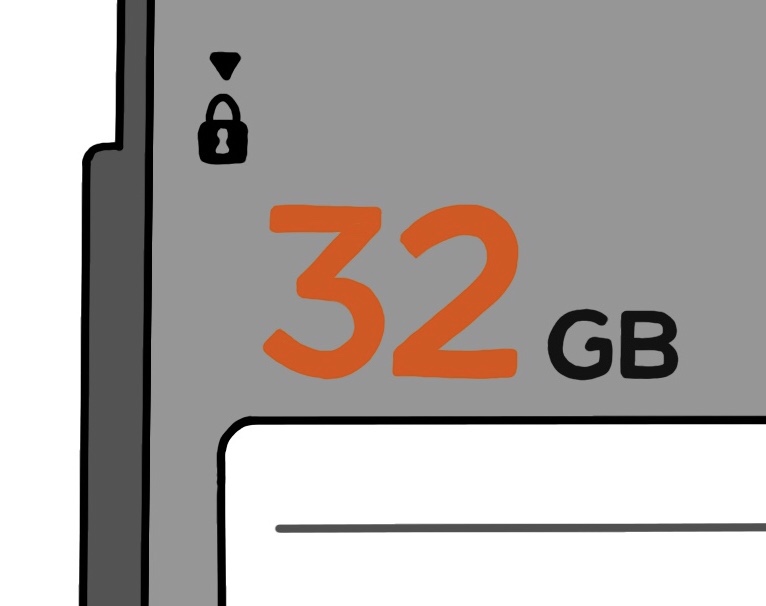 The Byte is now commonly used to represent a capacity, and hopefully, we are talking about GIGABYTEs now. So you will find a 32GB (capital B) which could have been a 32Go as well, but you won’t find a 256Gb (small “b”) label.

Next important number, on an SDCARD, the second biggest number which is the READING SPEED, the speed at which it is possible to read data from it.

This is relevant when you playback your clip on the camera or when you copy a file from the card to your computer. Note that this is a maximum value, not a constant guaranteed speed. This number is usually in MEGABYTEs per second because this way you’ll know how many seconds you need, to copy your 10GB file (remember this is the most commonly used unit to represent a file size in computers).

That speed is honestly not very important, because in the worst case scenario, you launch the file copy and do something else in the meantime.

The most important thing to understand about SDCARDs is the WRITING SPEED.

At a time when CD-ROMS were the main storage option beside Hard Drives, speed was related to 1-time speed, which was 150KB/S.

Because the card and the writing devices were better and better, it became a necessity to change that for real obvious numbers, and all together (except LEXAR) the SDCARD brands decided to write the actual write speed in MB/S. 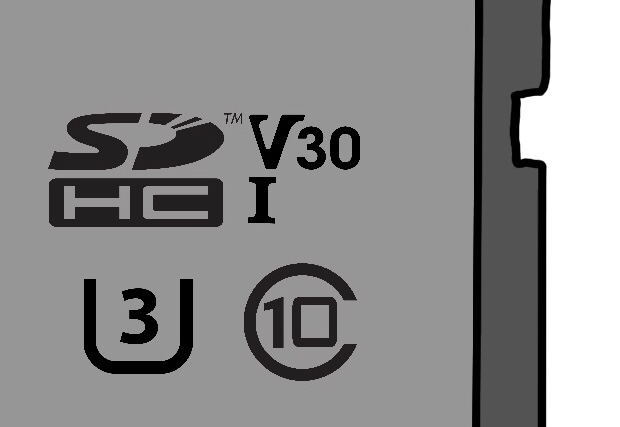 There have been many standards since the creation of the SDCARDs.

At first, the so-called CLASSES were a number inside a big C, and they were C2, C4, C6, C10 (we are still looking for the C8, which has been lost at some point). This was reflecting the actual constant writing speed in MEGABYTEs per second, from C2 for 2MBS to C10 for 10MBS.

V6 is not considered as a HIGH-SPEED CLASS and matches C6 class (6MB/S).

V10, U1 and C10 are representing the same writing speed, with some very technical variations in the way it is measured, with big files, to small chunks or constant sequential writing (Aswan you record a video file), but this is another story that won’t help to choose your SDCARD today.

Now how does this help?

Let’s say your camera provides a 4K video file with a bitrate of 400Mb/s.

You won’t be able to write this file in real time on a V30 card. You will need at least a V60 class card.

As most of the current cameras give you a 100Mbs 4K bitrate, a V30 is enough as it is capable of writing 240Mbs.

But you have to anticipate the use of the card, you have to know exactly what are the specifications of the camera you will put the card in.

This is the card bus standard called UHS. The number 3 is obviously the most recent, the fastest and more related to READING speed capabilities than WRITING SPEED, as even V90 write speed can be achieved on a UHS-I bus, though, you probably won’t find a UHS-I V90 card, more likely UHS-II or UHS-III, because this standard is more about adding various specifications than pure speed raise.

Last, SDHC, SDXC, and SDUC are basically the categories sorted by size range. This is relative to the storage size of the card.

In conclusion, you want to shoot 1080p footage at 100Mb/s, or 4K footage at the same bitrate, a V30 UHS-I U3 SDHC SDCARD will work perfectly.

But if you want to anticipate a future gear upgrade, and who knows, 4K at 400Mb/s or even 8K footage, you might better choose a V90 UHS-III SDXC or SDUC card … which will cost you MORE money today.

And one last thing.

The capacity could be wrong, a 128GBytes card will probably end up being a 32GBytes instead and the writing speed will surely be fake as well. So when you put this card in a 4K camera, you won’t be able to shoot properly, because the record will stop as soon as the camera buffer is full.

The price of a product from a well-known brand WILL NEVER vary as much from one shop to another.

Run away from amazing deals on good looking websites, selling tech gear at half the regular price (especially for photo or video hardware).

I didn’t talk about size, because « size doesn’t matter ».

I prefer smaller cards, like an old habit, to avoid losing all the data stored on a big card. I am using many 32GB cards, because it is cheaper, and because my shooting data are spread onto multiple units, rather than all stored on one card.

If any problem occurs, I won’t lose everything, only a portion of it.

Remember that the most important numbers are not the ones that are gold or silver written in big on the label, always read the small text.